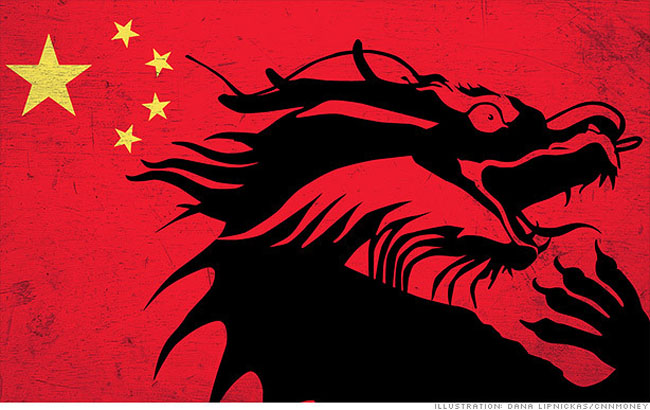 The opinions expressed in this commentary are solely those of Paul R. La Monica. Other than Time Warner, the parent of CNNMoney, Abbott Laboratories and AbbVie, La Monica does not own positions in any individual stocks.

If you believe that the stock market is a rational organism with a perfect track record when it comes to forecasts, then you should be extremely worried about China.

Fortunately, the market is often very, very wrong.
Chinese stocks have been lagging the rest of the world for some time now. The Shanghai Composite has fallen this year while the Dow and S&P 500 continue their record runs. The reason? Just about everyone and their mother believes that China’s economy is doomed for a big pullback, a proverbial hard landing.

Don’t get me wrong. There are reasons to be concerned. China’s real estate sector is undoubtedly frothy. And most economic data coming out of China is clearly pointing to lower levels of growth. But a hard landing? Many people I’ve spoken to think that investors are acting like Chicken Little (or maybe Dragon Little?) when looking at China.

“For the first time in a long time, I’m a lot less worried about a slowdown in China because everyone else is worried,” said Jim Oberweis, co-manager of the Oberweis China Opportunities Fund (OBCHX).

Oberweis concedes that China’s red hot property market needs to cool off and that there could be problems for banks. But that’s not a secret. He adds that investors are valuing China’s stock market as if a Lehman Brothers-esque 2008 event is on the immediate horizon.

So it’s hard to imagine a scenario where Chinese stocks fall dramatically further. If you’re worried about market bubbles and overpriced stocks, just look at the chart below. The P/E ratio for major Chinese stocks — as tracked by the iShares MSCI China (MCHI) ETF — is more than 50% below that of American and Japanese stocks.

Robert Howe, CEO of Geomatrix, a hedge fund based in Hong Kong, said investors are underestimating the willingness of China’s government to act aggressively to keep the economy humming along at a decent clip.

Howe said that one reason why China’s stock market has underperformed for the past few years is because the more legitimate worry was inflation. So China’s central bank could not afford to be so loose with its monetary policy. With China’s GDP slowing to 7.4% growth in the first quarter, there are calls for more stimulus.

And if China now goes into a quantitative easing mode like the U.S. and Japan to combat the worries of a real estate bubble bursting, then that will be viewed positively by investors.

“China will muddle through this. Beijing is very focused on the real estate debt problem,” he said. “But many companies that are well-positioned for growth are too cheap. You have babies being thrown out with the property bathwater.”

Howe said that two industrial companies that he thinks have been unfairly tarnished are HollySys (HOLY), an automation tech company similar to Honeywell (HON), and Hong Kong-listed China Water Affairs.

It’s also worth pointing out that even with China’s economy hitting a soft patch, it’s all relative. Growth of 7.4% is the envy of just about every other economy on the planet.

With that in mind, Hurst Lin, a Beijing-based general partner with venture capital firm DCM, said that for many Chinese in the country’s biggest cities, the economy doesn’t seem to be showing any significant signs of losing momentum.

“There has been hard landing talk about China on and off for more than two years,” Lin said. “It’s unclear if there is real reason to be concerned or if it’s just a case of the Western press saying it is so.”
Lin is a co-founder of Chinese media company — and CNNMoney Tech 30 component — Sina (SINA). He has invested in several other Chinese e-commerce firms while at DCM and says middle class Chinese consumers are continuing to spend pretty heavily, particularly on travel and luxury goods.

A DCM-backed Chinese travel company, Tunio (TOUR), went public last week in the U.S. and shares are trading nearly 15% above their IPO price.

Howe also thinks banking on the Chinese consumer for the long-term makes sense. He said that some Chinese online retail stocks are good bargains due to irrational fears that the soon to be public Alibaba will “crush everyone.” He owns car pricing information site Bitauto (BITA) and online real estate listing firm E-House (EJ).

As for Alibaba, Howe said he’d actually be wary of that stock once it debuts because it probably will be priced at a high valuation. He also said investors may underestimate concerns that Alibaba will face increased competition from the other two established Internet giants in China: Baidu (BIDU) and Tencent.

So where does China go from here? The days of double digit GDP growth are over. But that’s not necessarily a bad thing, especially since that breakneck expansion helped fuel the real estate bubble in the first place.

Peter Pham, managing director with the hedge fund Phoenix Capital and portfolio manager of the Prestige Global Growth & Income fund, said the Chinese economy is likely to keep growing just north of 7% — a little lower than what the government might like but hardly a disaster.

“China’s government recognizes that it has a major problem with the type and quality of the debt that exists and is moving aggressively to reverse that growth,” said Pham, who is based in Ho Chi Minh, Vietnam. “This is not considered a hard landing but more of a reflection on reforms and could be seen as sustainable.”

He added that a true hard landing would be GDP growth falling into the 4% to 5% range. That does not seem likely. Barring that, he thinks Chinese stocks will recover and that companies with ties to the still-emerging middle class are the best bets.

In other words, China may have learned (to borrow a phrase from Buzz Jr.’s latest movie obsession) how to train its economic dragon.